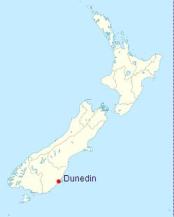 Today is the 1st day of the 3 match test series over in New Zealand. (You can listen to NZ radio commentary here)

Dunedin’s University Oval at 45° South is the most southerly international cricket venue in the world and as one would expect today’s start was delayed by rain, which is rather frustrating considering that I stayed up till 11.30pm to watch the first ball. The morning session was rained out, I passed out to awake with The Proteas at 90/4 and that after being 86/1 at tea!

Wiki tells me that Dunedin is nicknamed ‘The Edinburgh of the South.’ Dunedin is of course more well known for it’s Carisbrook rugby stadium (The house of pain) a ground which the Springboks had never won at ’till a famous victory back in 2008.

Our national broadcaster is very kindly broadcasting every game of the cricket world cup, I always have a match on while driving around here and this ad is flighted reasonably often, it always makes me smile. So I thought that a few cherished colleagues might like it.

Here it is: funny ad (Simply click and select ‘open’ when prompted)

I’ll answer my own question, not at all they were magnificent. END_OF_DOCUMENT_TOKEN_TO_BE_REPLACED

Stopped outside here today and popped in for a beer, it was hot, very hot, no not the beer, the weather!

That’s my parking bay right outside the front door END_OF_DOCUMENT_TOKEN_TO_BE_REPLACED

Some remarkable individual achievements at this weekend’s Centurion test

END_OF_DOCUMENT_TOKEN_TO_BE_REPLACED

Was it really that long ago? Let me explain…

It would have been in the November that the principal of Quest School phoned to say that the local sports club that is (almost) adjacent to the school had been asked to host The Barmy Army’s charity event and wanted to donate the proceeds to us!

Prior to the first test on any overseas tour The Barmy Army contact a local cricket club and hold a charity event, normally a limited overs match between their members and a ‘celebrity’ local team, followed by an auction of tickets, various memorabilia and a ‘fines’ session.

I made contact with Dave, the club captain and volunteered any help if he needed, not necessary he said but if I could arrange for a couple of children to come along, fine.

The event was planned for the 16th December, the day before the 1st test starting at St Georges Park and as luck would have it a public holiday!

Well, we arranged for a couple of extra items for the auction (a couple of cellphones, helicopter flip, game drive, the sort of things that a touring cricket supporter could use) and arranged a school picnic with all the children in their school tracksuits.

END_OF_DOCUMENT_TOKEN_TO_BE_REPLACED

It’s crunch time in the competition, our local lads have performed magnificently to qualify for today’s semi-final against the Aussie outfit from Adelaide up in Pretoria.

END_OF_DOCUMENT_TOKEN_TO_BE_REPLACED

Are we blessed or what? Just two months after the Football World Cup The Champions League T20 (effectively the club world championship) started in South Africa over the weekend and we’re a host city!

A 16 day non-stop jamboree of bright lights, fireworks, entertainment and cricket action as only those Indian billionaires know how.

Eastern Province (where I live) won the S.A. competition last year, I think our first trophy since the days of Kepler all those years ago and as holders are automatic entrants.

The competition comprises the top teams from around the world, India(3), Oz(2), W.indies, Sri Lanka, New Zealand and 2 from S.A. England appear to have thrown their toys out the cot and are not participating this year (they sent 2 sides last year)

So, we have 10 teams, 2 sections of five with the top 2 in each progressing to the semi-final stage.

Advertising down here is large, outdoor, press, radio and TV.

Our home side The Chevrolet Warriors (GM has a factory here) are playing their second game tonight against the Victorian Bushrangers, an Ozzie outfit who have won four of the last five Ozzie competitions that boasts the likes of Nannes, Siddle, Harwood, McGain, Hodge, Hussey (David) and the dangerous Andrew McDonald. Tickets are a reasonable 30 rand (£2.50) END_OF_DOCUMENT_TOKEN_TO_BE_REPLACED

I’m parking off (relaxing)  on Sunday afternoon watching the cricket and Mrs. S waltzes in and asks me if this is “still the first half”

Brilliant! Mrs. S has been to perhaps 50 cricket matches with me over the years but the analogy wasn’t “is this the first innings”

So, in the spirit of gender equality I now refer to the respective innings in one day internationals or 20twenty matches as halves, and why not?

I mentioned this to my mate Arthur today, he tells me about a Polish flatmate of his (a lady) who was introduced to cricket (via TV)  and became quite an enthusiast. END_OF_DOCUMENT_TOKEN_TO_BE_REPLACED

Unbelievable, The bar stood up as one, the applause rang out, could he hear us? Not at all. END_OF_DOCUMENT_TOKEN_TO_BE_REPLACED