One other circumstance is worthy of remark; and that is, that from the moment of their first outbreak…every symptom of order or preconceived arrangement among them, vanished.  When they divided into parties and ran to different quarters of the town, it was on the spontaneous suggestion of the moment.  Each party swelled as it went along, like rivers as they roll towards the sea; new leaders sprang up as they were wanted, disappeared when the necessity was over, and reappeared at the next crisis.  Each tumult took shape and form, from the circumstances of the moment…in a word a moral plague ran through the city.  The noise, and hurry, and excitement, had for hundreds and hundreds an attraction they had no firmness to resist.  The contagion spread, like a dread river: an infectious madness, as yet not near its height, seized on new victims every hour, and society began to tremble at their ravings.

Hi, everybody.  Sorry that I’ve not been here for a bit but I’ve been rather preoccupied with other things recently.  Anyway, I’m sure that those of you who do not live in England will have seen the scenes from

London, broadcast across the world.  I wrote the following piece yesterday afternoon in something of a rush, and in a mood, angered by some ignorant and ill-informed comment on an American-based online newspaper.  I’m posting it here by request.  🙂

I want to say a word or two about the riots in London, my city, my home. My view is that – as with the Norwegian massacre – it is best to stand back from such events before forming a definite judgement, simply to allow the facts to settle. But judgements are already being formed which have nothing whatsoever to do with facts and everything to do with politics. The suggestion is that these events, which have disgraced my country and its capital in the eyes of the world, are somehow to do with cutbacks. This is no more than a supposition, based not on evidence but wishful thinking.

The opportunity has also been taken to attack the police, that somehow they do not respect the ‘right to peaceful protest,’ an assertion that again is utterly at variance with the facts. No it’s more; it’s an outright lie, one that is clearly intended to give a completely wrong impression to people who know little of the Metropolitan Police, who know little of London and little of this country. If anything the police have gone too far in the opposite direction, a softly softly approach that sometimes makes the force look fumbling and weak, an approach that saw them lose control at the weekend END_OF_DOCUMENT_TOKEN_TO_BE_REPLACED

You’ve just arrived after a long journey, tired and looking for somewhere to stay.  You feel like treating yourself, so you ask your driver to take you to the best hotel that the town has to offer.  And he does; he could have picked none better.  Plush and polished, this five star establishment has over two hundred well-appointed rooms, a royal suite, a steam room, a swimming pool with a view of the sea and four restaurants.

So where do you think you have ended up; in one of the more luxurious Mediterranean resorts, perhaps?  Go out on the balcony and have a look around.  See, there, just to the south of where you are standing, the Hamas training camp should give you a clue.  Hamas; what, the terrorist group dedicated to the destruction of Israel?  Yes, Hamas; for this is Gaza and the hotel is the al-Mashtal, recently refurbished at a cost of $40 million.  END_OF_DOCUMENT_TOKEN_TO_BE_REPLACED 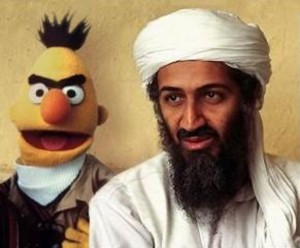 I’ve been trying to keep up with the conspiracy theories spawned by the death in early May of Osama bin Laden. The trouble is the furry little creatures have been multiplying faster than rabbits!

Barack Obama, himself the target of all sorts of peculiar notions, could not have done better to spur the speculation, which even spilled over into the main news media: the hasty burial at sea, changing versions of the exact circumstances behind the killing, the refusal to release pictures, all added to the process. And what a process it was, what a carnival.

There are people who abhor vacuums more than nature, filling the spaces with all sorts of oddities. There are those who question if the dead man is bin Laden at all, up to 66% of Pakistanis, according to a poll carried out on behalf of the University of Cambridge. Others have it that the US Navy Seals took him alive, to be spirited away to a mysterious AREA 51 (yes, that’s how it’s written, sinister caps and all), there to be tortured and killed at leisure. END_OF_DOCUMENT_TOKEN_TO_BE_REPLACED

This Wednesday, 22 June, marks the seventieth anniversary of the start of Operation Barbarossa, the German invasion of Russia.  It was to be the biggest, and the bloodiest, military campaign in history, concluding in the ruins of the Reichstag in May, 1945.

In retrospect Hitler’s precipitate decision, which was to mark the beginning of the end of the Third Reich, looks disastrous, was disastrous, because there were all sorts of reasons why Germany could not defeat the Soviets in a major war.  Russia not only had the space to absorb the shock of Blitzkrieg, a tactic pursued hitherto with such dramatic results, but it also had the capacity to survive defeats in battle that would have finished any other nation on earth.

But this is looking at history retrospectively, a God’s eye view, so to speak.  There is one question, looking from the ground up, that is still legitimate to ask: namely, how close did the German invasion of Russia come to success?
END_OF_DOCUMENT_TOKEN_TO_BE_REPLACED

I love the English language; I love its beauty, its directness and its simplicity. There are wells of our language, sources where words and expressions were first drawn that people continue to use, often unconscious of their origin. The work of William Shakespeare is one of the most important; the other is the Authorised Version of the Bible, the King James Bible, the translation of which was completed in 1611, four hundred years ago.

So far as I am concerned the King James Bible is the Bible, though I have never known it used in worship: the Church of England has long favoured the modern translation. But I grew up in a literate household, one where I was introduced to a range of influences from an early age, including the translation of 1611, based on the earlier Bishop’s Bible of 1568 and William Tyndale’s New Testament of 1525.

There is a marvel to it, a sacred marvel, if you like, lost in modern translation, a marvel that was to have a huge impact on the subsequent course of English literature. I am tempted to say that in abandoning the King James Bible the Church of England abandoned sacred language altogether, the beginning of a process of secularisation, disengagement and decline.
END_OF_DOCUMENT_TOKEN_TO_BE_REPLACED 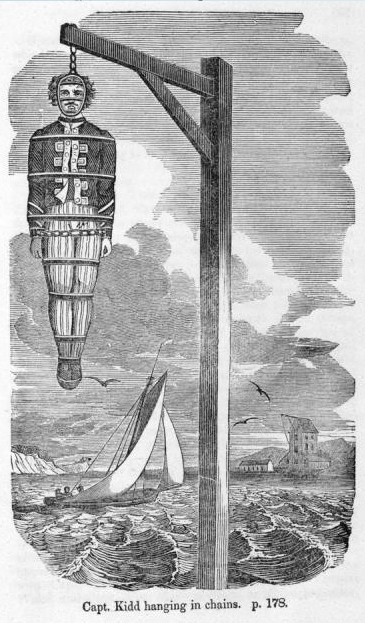 We’ve not long passed the three hundred and tenth anniversary of the execution of Captain William Kidd, by reputation one of the most notorious pirates who ever lived, of the Caribbean or any other of the seven seas.  Taken to Execution Dock in Wapping, he was hanged on 23 May, 1701, a particularly brutal event.  Twice the rope around his neck broke; the third time it held.

Afterwards, according to Admiralty custom, he was tied to a stake on the Thames Estuary to allow three tides to wash over him.  Not content with that, his bloated body was then dipped in tar and squeezed into an iron frame at Tilbury, there hanged anew as a warning to all future pirates.

The problem is William Kidd, for all the notoriety subsequently attached to his name, was not a pirate at all but a privateer, acting under licence at a time when Britain was at war with France.  That is to say, he was an ‘official’ pirate, whose plundering of enemy merchants had the sanction of the authorities, themselves party to a contract that promised a lucrative return in loot.  In the end he was betrayed in a shabby act of duplicity by the very people who had sent him out in the first place.

My interest in the subject was whetted by an article written by Angus Konstan in the June issue of the BBC History Magazine (The Sacrifice of Captain Kidd).  Taking this as my cue I did a spot of further research, coming up with some rather intriguing material. END_OF_DOCUMENT_TOKEN_TO_BE_REPLACED