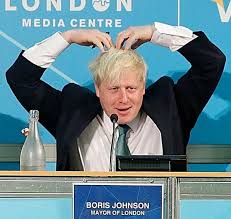 It’s refreshing to see that the worlds of politics and entertainment are finally merging with Backside’s hero – the toffs’ answer to Russell Brand – threatening to return to the House to lead the ever-amusing Tories into the next election.

So all together now!

Bring me Sunshine, in your smile,
Bring me Laughter, all the while,
In this world where we live, there should be more happiness,
So much joy you can give, to each brand new bright tomorrow…….. I always think of Dean Richards, the Leicester, England and Lions no. 8 who starred in the Bloodgate Incident; and Luis Suarez, the mercurial Uraguayan footballer who has an outstanding record of crossing the line. (Don’t even mention the countless cyclists.)

Both of my named cheats are now ‘reinstated’ and prospering. Does that mean we are expected to forget their transgressions? Is it OK to ‘put your hands up’ when you’re caught and go back to ‘normality’?

I don’t think so.

My headline is a quote from the ever charming PoW, addressed to his first wife; but it is also my own reply to this delicious BBC piece about French waiters.

Are the Froggies finally seeing the error of their ways? I doubt it but it’s fun to watch them squirm.

What’s he going on about now? Formula? Nerds?

Yes, I’m sorry. It’s Backside again, being abstruse (one of his fave words). It’s about poetry – wot he likes doing – but he finds it impossible without a formula, a framework, a function. The three Fs, you might say.

So your mission this month, should you wish to engage, is to reveal your innermost workings by means of this plan:

There! That was easy, eh? Only five lines at a time, rhyming or not, scanning or not, serious or not – but as many emotions as your constitution will stand. But no deviation from the formula, p-lease!

“…and now Angela is modelling a generous, practical, yet essentially austere number designed for life in the modern Europe…”

Light blue hats at border posts
They’re the troops we love the most!

When the shells begin to fly
They’re off home – no fond good-bye!

I’m sure some cherished colleagues have diplomatically mild views on how best to punish criminals.

But HMGov has come up with a humdinger – taking the fags away from the 80% of inmates who smoke. What a stroke of penological genius! Let’s show genuine concern for the prison environment, not to mention the health of the minders and the minded.

Backside wonders whether most of the deprived denizens will ask for transfers to Rikers island, Bang Kwang or La Sante where they could at least nurse their bruises with a quiet drag.