What a day! What a weekend! What an event! What a crowd! What an atmosphere!

On an emotionally charged weekend, how fitting was it for the very first International sporting event to be held on South African soil after the death of Nelson Mandela to be held in the stadium that bears his name?

16 teams, 45 games, an extravaganza of rugby if ever there was one!

It’s fair to say that we probably spent more time in the bar / lounge during the day on Saturday then in the stand (except of course when the Blitzbokke were playing) it is after all a day of preliminary group stages where the minnows get the chance to play against the big guns but today (Sunday) was the main event, and what an event it was.

The beauty of this format is that it splits into 4 competitions during the course of the final day (Shield, Bowl, Plate and Cup) with all teams having a chance of gaining a medal and silverware as late as the mid-afternoon!

We got the dream final we wanted. The Blitzbokke cruised through their quarter and semi finals as did the All (cough) (splutter) Blacks.

I’ve written elsewhere that I thought that the Ref had a couple of ‘Mandela moments’ during the final but who cares? Final score Blitzbokke 17 – AB’s 14 (3 tries to 2)

A win, a glorious end to a brilliant weekend

We had our usual royal lounge seats on the halfway line above the tunnel.

The boys in blue were present as usual, note that they’re all carrying sidearms. 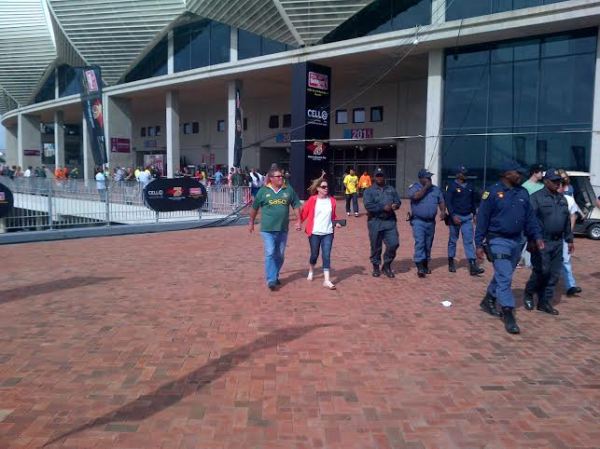 Remember my “To Dad from Dad” present last Christmas? The portable 7″ satellite television receiver? Well we put it to good use today, here’s our table in the Royal Lounge, live rugby on the flat screen TV, that’s my ‘Walka’ on the table, The Proteas were busy thrashing India up in Durban, we were able to keep up to date with both events while taking a well earned break from the hustle and bustle of the stadium.