Have I mentioned how much I’m enjoying this year’s Super Rugby season?

As mentioned elsewhere, it was the turn of the New South Wales Waratahs to visit our shores. Our Kings have had a good record against Australian teams this year, in fact all 15 of our log points have come against Aussie opposition. (Wins against the Perth based Western Force and Melbourne Rebels and of course that last gasp draw against The ACT Brumbies)

Hopes were high, well mine were, for all of 30 seconds that is, for that is just how long it took for this Aussie outfit to score their first try!

After that? Believe it or not it got worse, they ran in try after try and for all of the first half consistently had more points on the board than minutes passed! Men against boys I kept thinking, it was really really difficult to watch. As a life long Eastern Province supporter (a team who’ve never won any top flight competition) I’m sort of used to losing, this wasn’t just ‘losing’ this was ‘annihilation!’

It wasn’t all doom and gloom, our new darling of E.P.rugby Sergeal Petersen got us out of our seats with a brilliant try just before half time, but I’m afraid that was all my Kings had to offer.

END_OF_DOCUMENT_TOKEN_TO_BE_REPLACED

I’ve often said that there isn’t a bad seat in the house at our new stadium, there are of course good seats, great seats and then there’s these – 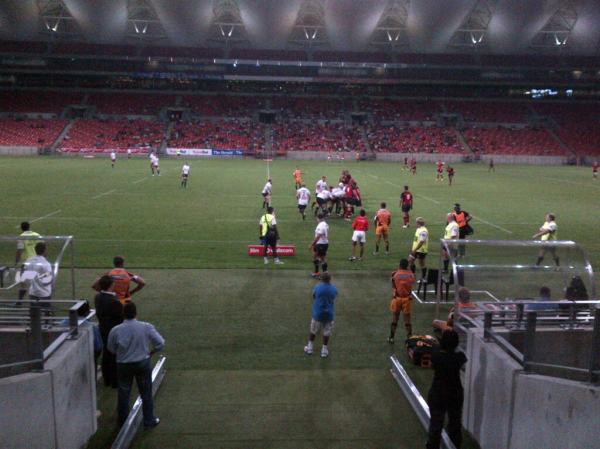