I’ve often said that there isn’t a bad seat in the house at our new stadium, there are of course good seats, great seats and then there’s these – 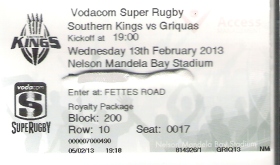 A local bar owner and good friend of mine has bought 2 ‘Royalty package’ season tickets to be awarded as prizes during in-house promotions. The promotion is, spend 50 rand or more write your name and tel. no. on the back of your bill and you’re in the draw.

Our Southern Kings (this year’s newcomers to superrugby) had their final practice game Wednesday night against the reasonably strong Currie cup 1st division outfit Griqualand West and you’ve probably guessed by now I got the tickets. (The sales promotion hadn’t started and I obviously convinced the owner that we couldn’t let them go to waste, plus it was necessary that a trial run be performed just to ensure that all was okay!)

Well then, I’ve attended more events at the stadium than most, often stating that there isn’t a bad seat in the house, I’ve sat in almost every section / block and at all levels and yes I’ve been a guest once or twice in corporate boxes, nothing has a patch on these!

The package includes parking inside the ground, and access to the Royal lounge complete with televisions, private bar and private toilets.

The match itself was disappointing (Kings lost 27 -30) the Kings performance (and yes this was a full strength squad) not I suspect anywhere near what I’ve witnessed from other Superrugby outfits but as the old saying goes it not how you play the game that matters but the quality of the view!

1st competitive Super game against the Aussie Western Force next Saturday, I’ll be there but not there if you know what I mean 😕