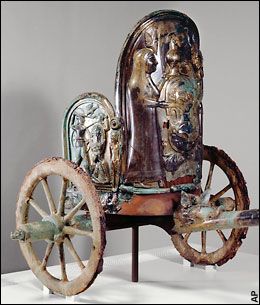 The moon? Pieces? Helston in a handbag? (A handbag?!)As too often in recent years, the Chariot has sprouted weeds, begun to squeak and lost its brazen lustre. Weapons lie rusting nearby and our trusty dray-horse is seeking alternative employment.

No lame excuses, please. Busy, on holiday, painting the shed, planning a party………