A Modest Proposal, with profuse apologies to Jonathan Swift 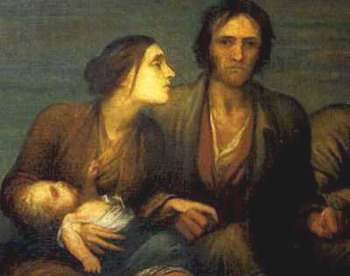 “A modest proposal for preventing the children of poor people in Ireland from being a burden to their parents or country, and for making them beneficial to the public”

The Irish problem could be solved, there’s quite a simple cure,
By dining on the offspring of the nation’s poor.
Oven-ready babies could be sold when weaned,
They’d fetch a fortune so I‘m told; ten shillings maybe more.

The streets are full of paupers, offensive, I would deem.
The poor, who reproduce at will, must support my scheme,
And those who charitably deplore the many adult beggars,
Will doubtless see the sense of this, although it sounds extreme!

With roast potatoes, condiments, a baby’s hard to beat;
A family of four or more could dine on tasty meat.
Cold cuts next day and then a stew, a splendid cheap repast,
Make use of skin for boots and gloves, a lovely lady’s treat.

A modest plan, but surely kind, I hope you will pay heed,
So tiny tots will not grow up to suffer, starve or plead.
Diseased and starving beggars  will soon become quite rare,
The more you roast, fry, fricassee, the fewer left to breed.

5 thoughts on “A Modest Proposal”