It was love at first sight. The moment I set eyes on Cordelia I wanted her with a passion my wife neither understood nor forgave for years. Cordelia was resting on the mud, her distress obvious to me, yet her lines were classically beautiful. She had aged well, but neglect has taken its toll. She looked like a proud old lady who had fallen on hard times. She was, in fact, stronger than she appeared and cradled gently, she made the journey by road to her new home on the banks of the Thames.

Immobile though she was for some years, Cordelia still exuded charm, although at first, Jenny my wife, didn’t warm to her. This new addition to our household caused a certain amount of friction. Cordelia was an expensive mistress. For the first few years she demanded both time and money and Jenny resented this bitterly.

I had done some research into Cordelia’s background and her despite her obstinate silence on the subject, it was much as I imagined when I first met her. She came from the Isle of Wight and was seventy five years old. As part of an upper middle class family she travelled extensively. At an early age she played a small but important part in World War Two, and then travelled to Scotland where she patrolled the estuaries and coast. After the war she still travelled extensively around the south coast and spent some time in France.

Eventually the old lady was restored to her former glory. Gleaming and ready to go she was launched back into society. Cordelia tried her best but I could tell her heart wasn’t in it. She felt demeaned by her new role. She felt she deserved better than this, and I sympathised. She stood head and shoulders above most of the modern craft and she hated them with a vengeance. They trembled in terror at the sight of Cordelia approaching a lock, and only a firm hand at the helm persuaded this boat to behave.

Thus Jenny’s plan to take Cordelia to The Traditional Boat Rally, was a resounding failure. Cordelia sulked. She refused to move, and when her batteries were recharged, laden with food and champagne she reluctantly set out. She looked beautiful, teak decks gleaming in the sunlight, ropes neatly coiled, and with ten guests aboard, she motored confidently along the river. She then crashed into the side of the approaching lock. Cordelia made it quite clear that her role as some sort of floating gin palace was not to her liking as she then ran aground in the shallows.

To be fair she weighed eleven tons, was thirty five feet long, with a draft of three and a half feet, the upper Thames was not her natural environment. Jenny persevered for the rest of the summer but Cordelia’s behaviour did not improve. She was like a fish out of water and even Jenny finally agreed something must be done.

It was towards the end of the summer one warm evening as we sat on Cordelia’s deck enjoying a drink and the quiet peace of the river, when I casually mentioned the 70th anniversary of Operation Dynamo. Cordelia shifted slightly beneath us,  her mooring ropes tightened,  and even Jenny looked enthusiastic.

So early one morning the following April we set out down river, just the three of us. Jenny and Cordelia has arrived at some sort of understanding now and the boat negotiated the locks with ease as we approached the tidal Thames. Mast raised once we had cleared the bridges, both engines perfectly in tune, she headed for the Channel and joined the flotilla of “little ships” once again bound for Dunkirk. She was in her element, brimming with enthusiasm as her bow breasted the waves, and the spray rose over her fore-deck. A glorious reunion. Jenny and I were confident she would make it to Dunkirk and back. She’d done it before and she would again. 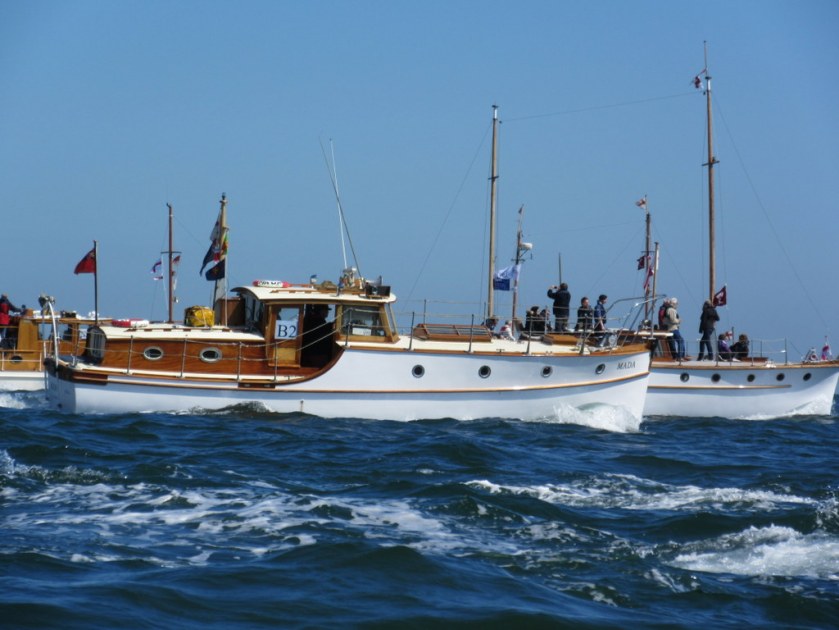 25 thoughts on “Cordelia: A Short Story”