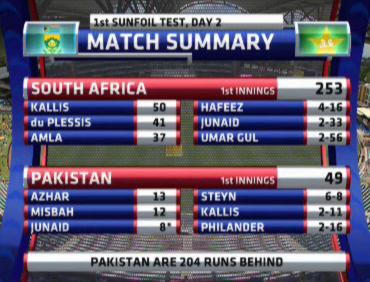 Smith won the toss and decided to bat, it’s never easy on the first day up at The Wanderers, Protea’s wickets fell at regular intervals but I was buoyed by a comment from Andrew Samson that an average first innings score up there was ‘only’ 260. Average is rarely good enough but I was reasonably satisfied with our 253 at the end of the day.

Who could possibly have predicted yesterday morning’s carnage Pakistan 49 all out! Just slightly better than NZ’s 45 last month and Oz’s 47 in Cape Town (Nov 2011.)

A bit more batting practice for our middle order today, improve those averages, get some time at the crease, build confidences where necessary and then unleash Steyn, Philander, Morkel and (perhaps) Kallis.

3 thoughts on “No contest”