Never in my wildest dreams did I envisage watching international rugby right here in the Eastern Cape in the middle of December.

This week was historically reserved for the first of our summer holiday cricket tests, always played at St. George’s Park and always well attended. That was until the thieving, fraudsters who now run S.A. cricket sold out to bigger unions. ‘Our’ test is now going to be played up in Pretoria, most Pretoria residents are now on holiday and probably at the coast enjoying the sunshine and beaches or off at a game park, there will be nobody at Centurion but when has common sense ever prevailed over administrators lining their pockets?

Back to the rugby.

The 2 day event is billed as ‘Rugby’s biggest party’ take my word for it, it is!

What a day, what an event, rugby like you’ve never seen, non stop action, 21 games yesterday, starting at 11:15am finishing with the final just after 8pm.

Below is a pictorial of my day (yes ladies, it’s not all about rugby but the day, feel free to have a look :)) 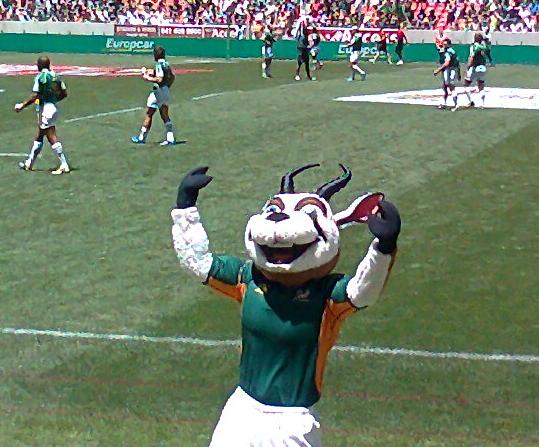 The aptly named Springbok mascot Bokkie encourages crowd participation during the Blitzbokke (that’s what our sevens team are affectionately called and quite aptly too!) game against France.

He got hauled over the coals during the afternoon for encouraging and applauding loud jeers whenever the New Zealand squad came out to warm up or practice, all good fun in the end, they expect it, we give it.

Official attendance was about 28,000 a turnout that the organisers were ‘delighted’ with, considering that this is the first time that the event has been held here. I know that on TV the stands often look half empty, there are many reasons for that, firstly, as happened with a friend of mine sat in the row behind me, some bring the family and perhaps only have time to watch half of the days proceedings not all want to spend a full day watching. Secondly, there’s a heck of a lot happening within the stadium perimeter, be it the food halls, bars, exhibits by various manufacturers or simple trips to the loo! 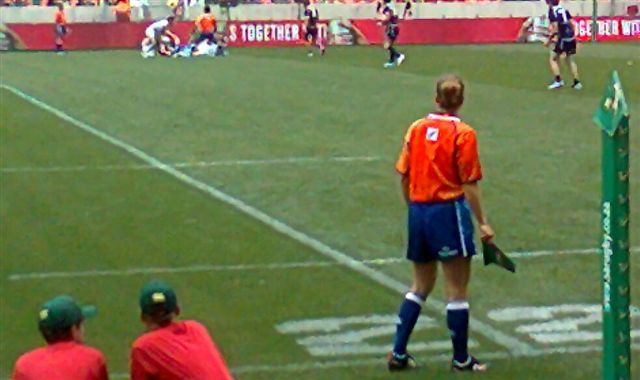 Lady officials, lots of them and why not, good for them. Talking about officials the game is controlled by 5 officials plus the TMO. That’s a ref, 2, linesjuges and 2 officials at the dead ball line behind the goal. It’s a great idea and should be considered for the 15 man game.

I mentioned camaraderie early on, what spirit and friendship shown by the players, each and every team walked the full perimeter of the pitch after their final match and applauded us! Irrespective of whether they had suffered a humiliating defeat or won a trophy (there’s four trophies on offer) around they came and thanked us for attending, a wonderful gesture and much appreciated by us all.

The players were more than happy to walk up to us in the stand and allow photo opportunities or simple handshakes, here two of the Scotland team mingle with our section of the crowd.

Here an England player allows a photoshoot and an autograph for one of the younger fans. 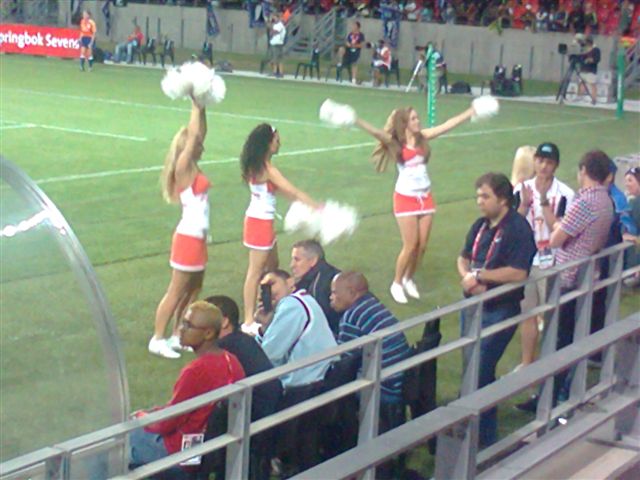 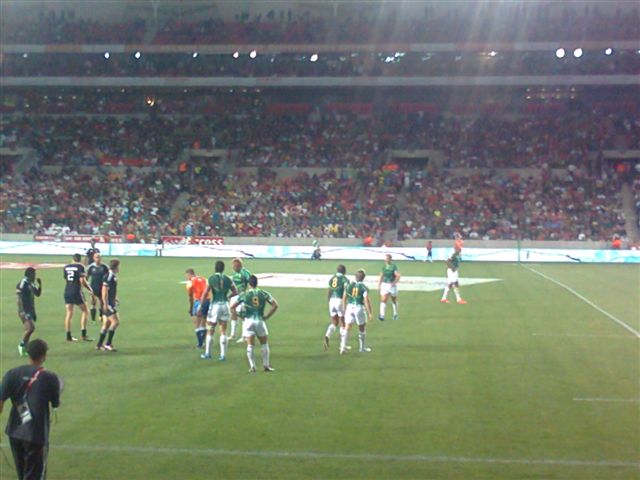 And finally the final. The Blitzbokke did brilliantly qualifying for the flagship final, they were always the underdogs against the mighty New Zealand outfit. Inspired by the return of ‘world sevens player of the year’ Cecil Afrika (that’s him on the cover of my programme) the Blitzbokke had the game won with 20 seconds remaining, a breakdown, a lucky bounce, a fortunate kick, an unfortunate slip by one of the blitzbokke, great anticipation by 2 or was it 3 All Blacks and a heartbreaking 7 pointer scored with perhaps 1 second left on the clock.

No hard feeling here, well done New Zealand, a great day, a great event, I’ll definitely be there next year.

All pictures taken with my phone camera, iffy quality I know but I’m happy with them.