Most years my tomatoes are a flop. Each April I buy nice heathy looking plants from our local garden centre, a mixture of cherry and larger varieties. Each year I spend money on plants, fertilizer, canes, soil (in Spain it is like gold) and water. Every year I moan that the return on investment is simply pathetic. We harvest our few measly tomatoes at the time when we can get them from the market at about 50c per kilo.

But I can’t stop trying.
END_OF_DOCUMENT_TOKEN_TO_BE_REPLACED

Where to start, a bit tricky really, but hey ho here goes.

John was my brother. The story that I am going to tell you is also the reason why I have not been able to put pen to paper (or finger to keyboard) for over a year.

“Why am I writing this?”,  I ask myself. Well, maybe because there is nothing else I can do.

John was the eldest of three brothers. I am the youngest, or as my parents used to annoyingly call me when I was little, “Bab”.

After a hard beginning, growing up in Lowestoft, being evacuated to the midlands in 1939 and finally joining in the war in 1942, missing any opportunity for a good education, Dad brought up his three sons with a rod of iron. He didn’t know any other way. Boys (and wives) had to be kept in hand. That was the way of his world. He had an almost obsession for schoolwork and education. I later began to realise that this obsession came from his lack of education. He was an intelligent man and easily capable of a university education, but life had handed some bitter blows which meant his time had passed. He therefore wasn’t going to let that happen to his boys.

END_OF_DOCUMENT_TOKEN_TO_BE_REPLACED

I need to have a rant.

The modern way of argumentation is getting on my wick.

People just love to try to win arguments by vilifying their opposition with labels. Some examples:

I think that using such extreme labels to try to win a discussion shows that one is already struggling to find honest logical arguments.

Was it always like this or is this something new?

A couple of things:

We went out for a meal yesterday evening. Sitting on the table to my left was a couple, man and woman (that needs specifying these days) of around 45-50. They appeared to be well dressed and professional people. To my right was another twosome, two older guys around 65-70.

The 50 year olds spent 98% of their time with their respective smartphones. Their conversation level was nil and I (after a couple of glasses of wine) almost burst out laughing at the sight of them thumbing their little screens for all they were worth. Now they could have been professional people who were still working, messaging colleagues, although it was well after 9m. (Spain …eat late….Janus…remember?). So I couldn’t resist leaning over and taking a sneak peek…yep…Facebook. He was updating his status on Facebook.

I glanced across to the two older guys. They had a litre of red wine and were very much enjoying the moment, chatting good food, a real social occasion.

It made me wonder. Did I have the past on my right and the future on my left? If so, I am glad that I am geting older. FOE suggested that the couple on my left would probably have just sat quietly staring at each other, had they not had their phones with them.

I guess most younger people would have found the situation quite normal and not even noticed that the phone couple hardly spoke to each other.

My other point for today is rather sad. I keep a Christmas list for cards and presents. It is quite handy when out doing the Christmas shopping, to remember who I still need to buy for. I keep the list in an excel sheet and just do a quick update each year. This year it was quite hard deleting all of the dead ones since last year.

Now that Janus has encouraged us all into the Christmas spirit with the poetry how about something a little more challenging?

We all have our little secrets and anecdotes from the past. How brave are we to relate them on here?

A little anecdote, the only rule being that it must be true and it must be about you.

A prize will be awarded for the story voted as being the funniest, most interesting, or downright unbelievable.

After crawling out of bed this morning, prising the eyes open with matchsticks and putting all of the empties into a bucket ready for the rubbish, it occurred to me what a good night we just had with our new french neighbours.

They speak only French and about 20 words of Spanish. We speak German, English and a poor level of Spanish.

The evening began with very low level conversation due to the language barrier.

And do you know why the communication improved so much during the evening?

Well, it is in the waste bucket this morning.

Please don’t be offended if I don’t reply to any comments for a while.

FOE, where have you hidden the paracetamol?

As a relative newcomer, and someone of incredibly poor memory, it does my head in when we each make comments trying to remember who is living where. It is especially difficult for the newbies like me.

I hope this suggestion is received in the spirit that it is intended but could we all leave a comment about our whereabouts?

For privacy reasons you make want to give just the country, for others less concerned with such privacy a biography of up to 10000 words would be fine. 🙂

For me it would help tremendously to know who I am conversing with and where. I could then refer back to this blog when my memory fails me….where was I? Oh yes:

I live in Catalonia about an hours drive south of Barcelona.

I have been born in Nuneaton which is quite an admission in itself. The place has become an absolute dump: Correction, it always was a dump. If I count Aunts, Uncles, Cousins, children and grandchildren, it comes to well over a  hundred of us. At the age of 38 I moved to Berlin where I lived from 1994 to 1999. Then on to Munich until 2002.

Due to a career move I then came back with Mrs Gaz to the West Country, where we lived for ten years in a little village very close to the river Severn. It was a lovely time and certainly not a boar.

Last year in October we moved down to Catalonia where we intend to stay until the ashes are spread.

Having just come inside and battened down the hatches ready for tomorrow’s storm and heavy rain (nothing desperate I must add, just the usual monthly thunderstorms) I thought it perhaps remotely interesting to tell you about my wood passion.

Even though we live in a warm country and heating costs are quite minimal, we still prefer to sit in front of the woordburner during the winter months. There is something very special and cosy about real fire, rather than the dry but warm hum of the central heating system.

Obtaining wood here is not so easy, so I collect and cut my own.

Quite a long drive from home, in the foothills of the Pyrenees near the village of Oliana, (for those google maps freaks) is a large reservoir. The reservoir is remote, surrounded by forests and changes level regularly as the dam gates are opened and closed. Consequently, in the direction of the flowing current when the gates are opened, a large amout of flotsam gathers on the shore in a particular spot. Each year the new wood is deposited along about a kilometer stretch and dries in the sun. It is presented for collection by anyone who is crazy enough to go for it. I have only once seen  another person gathering it. 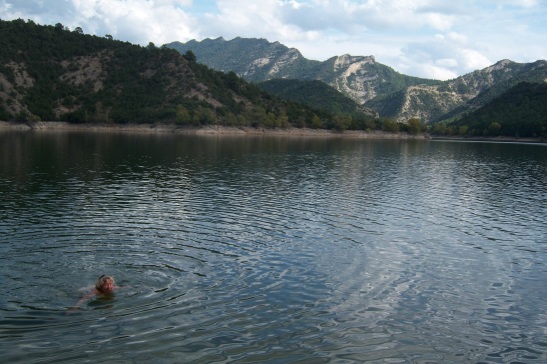 END_OF_DOCUMENT_TOKEN_TO_BE_REPLACED

I know that many of you on here also have one eye on MyT, and many, maybe all, have originated from there.

This is just to let you know that I am leaving MyT for good. I will delete my account today.
I have been observing how the different people react and have seen that it is no longer a place for me.
Over the last few days I decided to have a real go at Helpmaboab, one of the most ignorant,  and try to show him how it feels to be continually hounded the way he does it to others, but instead he just lapped it up. He actually thrives on disgusting comments and insolence. There is a group of likeminded people who dive immediately to his defence regardless of what he writes. All the sniping leaves me feeling rather cold.

Despite these comments I think that I am also a great part of the problem. I react very strongly to insults and bad behaviour, rather than ignoring it. My reaction is often seen as being just as bad as they are. I am quite ashamed at the comments I have written recently, trying to persuade them to act properly. It is strange, but I have never once had a negative discussion on the Chariot.You all act and speak similarly to the way I was brought up.

Is it simply because here you are all more civilised? I guess so. (I hope so)

So, I will stay with the Chariot, for as long as you will have me.

Why am I telling you all of this? Ask me something simpler.

Just sorting through some old stuff. Who could still use one of these?