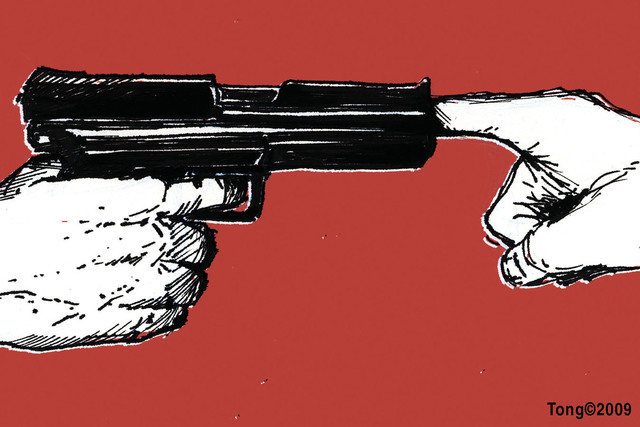 It is almost inconceivable to have had so many mass shooting tragedies in the USA within such a short time span. But so we have and here we are, with a large part of the populace reflexively calling for “gun control,” whatever that is. I darkly suspect that those people have no better idea about it than they do about “global warming.” If they were all so clever as they like to think they are, surely by now we’d have had some possibly useful ideas about how to solve the problem.

As many of you know, I live in the USA, where the second Amendment to our Constitution specifically guarantees the right to bear arms. True, certain restrictions (e.g., a ban on carrying *concealed* weapons without a permit) may be imposed and those vary from one jurisdiction to another. In general, however, we are much better equipped than residents of the UK, where existing law very nearly forbids possession of any weapon more formidable than a plastic picnic spoon. I own two guns myself but have not (yet) used them on another living creature. In the State of Washington where I live, it would, however, be perfectly legal for me to mount a terminal defense against home invaders. You will then readily understand that, to me, the principal and literal meaning of “gun control” involves keeping a good grip on one’s weapon.

I agree wholeheartedly with the saying that “guns don’t kill people, people kill people.”** Guns only make the killing easier. Without a gun, those violently disposed will readily use anything that comes to hand. Some years ago, while empaneled on a Grand Jury, I heard a case involving a man brought into the A&E with a carving fork embedded in his head, where his girlfriend had planted it. Other cases involved more conventional weapons but still bore out the concept that a gun is not a prerequisite to violent crime. The British newspapers these days are full of “knife crime,” “moped crime” and who knows what else. People will do what they will do.

The question is: what will *we* do? It seems painfully obvious to me that it must involve concentrating on those individuals possessing guns rather than on the guns themselves. Some of our office holders have sounded halfway reasonable on the subject but, unfortunately, their legislative bodies seem to lack the will and the funding to do what needs to be done. We are perhaps getting closer to extending and enhancing background checks to be done on all prospective gun buyers. No one, however, seems willing to even think (at least publicly) about mandating complete and detailed mental health evaluations (which would, granted, cost the Government a whole lot of money) for all who would keep a firearm. Even that is not likely to be perfect but it certainly wouldn’t hurt.

** – When George H. W. Bush (Bush senior) became President of the USA, he said that he had been forced to eat broccoli as a child and, now that he was President, he didn’t have to eat it anymore. In the wake of his statement, there appeared a bumper sticker reading: “Guns don’t kill people. BROCCOLI kills people.”