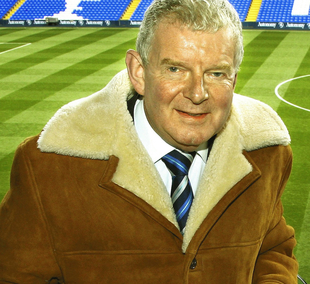 John Motson OBE, of the sheepskin jacket and Midlands twang, is retiring after 50 years on the mic. The Evening Standard celebrates appropriately:

”The 72-year-old has covered 10 World Cups, 29 FA Cup finals and more than 200 England matches.
He is renowned for an encyclopaedic knowledge of the game – and the occasional on-air gaffe.

Here, we recall some of his most memorable moments behind the microphone.

“Here’s Gascoigne. Oh brilliant! Oh yes! Oh yes!”Paul Gascoigne scores ‘that’ goal against Scotland at Euro 96.
“Whether that was a penalty or not, the referee thought otherwise.”
Clearing up a contentious decision.​
“Middlesbrough are withdrawing Maccarone the Italian, Nemeth the Slovakian, and Stockdale…the right-back.”
A substitution sparks much mirth.

“The Brazilian supporters are wearing yellow shirts – it’s a fabulous kaleidoscope of colour.”
Another World Cup, another memorable line.
“Hold the cups and glasses at home. You can smash them now! David Beckham has scored for England!”
David Beckham’s breakfast-time penalty against Argentina at the 2002 World Cup.
“The World Cup is a truly international event.”
More than once, in fact.
“It’s Arsenal 0, Everton 1, and the longer it stays like that, the more you’ve got to fancy Everton.”
Veering towards stating the obvious.

“The Crazy Gang have beaten the Culture Club.”
Underdogs Wimbledon shock mighty Liverpool in the 1988 FA Cup final.
“And Seaman, just like a falling oak, manages to change direction.”
England goalkeeper David Seaman apparently defying the law of physics.
“For those of you watching in black and white, Spurs are in the all-yellow strip.”