Everything is ridiculously early, about two weeks so I would estimate.

These are snow peas in my patch of the community garden up in Everson.  No deer there and a bit of company from likeminded gardeners.  Gives the dogs a break too, they get to supervise more humans. 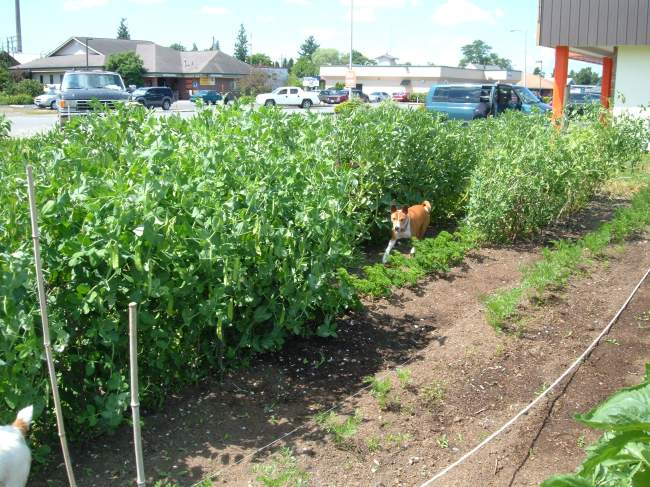 Nemo supervising parsley growing and hopefully not encouraging it with his self watering system! Must hastily add this is not a fruit but the dog may well qualify as a fruitcake! 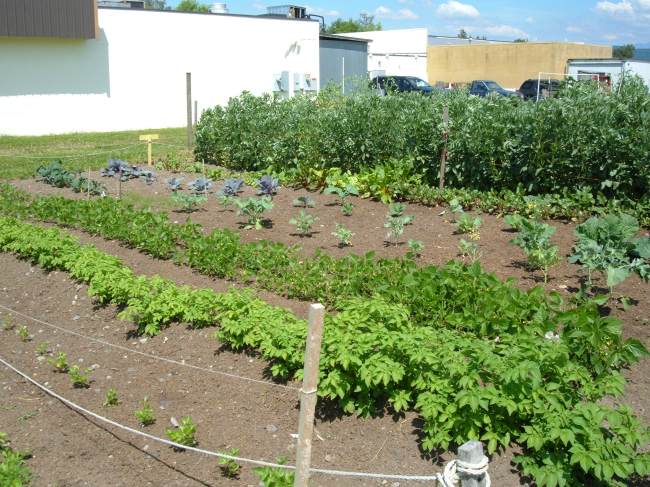 All doing rather well this year with weeds well under control.  You are supposed to be admiring the broad beans busy fruiting!  We have picked peas and beetroot so far with carrots ready within the week.  We started planting very early April.

This is back at home, the deer won’t eat runner beans for some reason.  I have never ever picked beans in June before, generally second to third week of July.  These are my own seed and planted two to a pot in the greenhouse in the beginning of March.  Hysterically the new gardener next door who really fancies herself as competent has her beans about 8″ high.  I forebore to mention mine were 8′!!!  Fortunately she cannot see mine from there, enough to give her a complex or a Round UP attack!

I hasten to add, before the cries of derision, that these do not qualify as fruit, just rather good this year thanks to the neighbour’s rabbit shit, who’d’ve thought it?  Mega pleased with them.

This is supposed to be an ornamental plum.  But somewhere in it’s ancestry there must have been a mixed metaphor or wot?  Some years it fruits manically, they are excellent for wine and plum chutney, not being too sweet.  It is a bugger getting out the stones, they are only an inch in diameter when fully ripe with very little flesh on each.  Worth the effort for the flavour and they don’t get the dreaded leaf curl disease, a BIG plus.

The cherries have done well this year, the race is on to beat the birds.  Fortunately there are so many wild and cultivated cherries in the area there aren’t sufficient birds to steal them all.  Bird plummeting to the ground overloaded with fruit round here!  Just like Ryanair!!

The landscape roses did incredibly well this year, so many flowers they have collapsed on any putative weeds, wonderful!

I must hasten to add for cherished readers that these are non competitive pictures.

Landed on one side safely. View all posts by christinaosborne