My hero, Socrates (or at least Plato’s characterisation of his old teacher) would have enjoyed gaz’s post about changing the world and all therein; seven steps towards happiness perhaps, the pursuit of which is every American’s dream, alongside life and liberty.

The snub-nosed Greek’s starting point for his discussion with gaz would have been his own eirôneia or ignorance, his clean sheet on which he jotted the answers to his questions, in a quest for the truth. And funnily enough, he would have passed quickly over gaz’s nos. 1, 3, 5 and 7! Why ? Because he could see the commonsense they demonstrate. (And to prove a point, he took the hemlock after disagreeing with the politically correct opinions of the sophists, whose own greed and casuistry caused his blood to boil.) 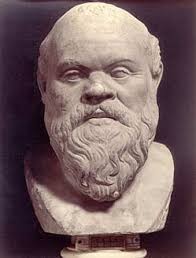 Which leaves 2, 4 and 6. Well! The world was somewhat different when Athens ruled supreme. There WAS world government in their terms, because they ruled it – or at least the part they thought was worth bothering about. And Athens did practice real democracy – at least if you discount the opinions of the slave population, which happily for the free citizenry did all the work! In that sense the Athenians themselves could have agreed with gaz’s ideal: you don’t need to work to exist (unless you are a slave).

So good on you, gaz, for parading the eternal questions for society to answer. It’s nice to be reminded just how eternal they are.