By now we were old salts, so we could handle the long voyage from Rhodes to Iraklion in northern Crete with aplomb, almost able to ignore the loukoumia problem; but we were glad to disembark to the frantic accompaniment typical of every busy port we visited. 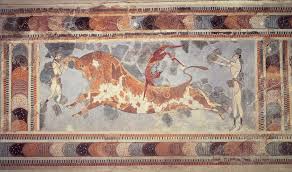 Our focus was to see the work of a famous alumnus of our college, Sir Arthur Evans, the pionering archaeologist who, from the start of the  20th C. first gave meaning to the ruins of the ‘Minoan’ civilisation; he named it after the mythical King Minos of ‘Minotaur’ fame. The fabled bull was a common feature of the frescoes he excavated and controversially restored in the reconstructed ‘palaces’ – probably a misnoma for rooms and streets occupied by more than just royalty.

At the time we visited the Knossos and Phaistos sites, archaeology was still in progress – unearthing treasures from the Bronze Age dating back to 3,000 BC; and establishing their links with the Greek mainland and the conflict between the Minoans and the Mycenaeans – whose Lion Gate I featured in pt.1. And only a few years before, a scholar named Michael Ventris (et. al.) had deciphered Linear B, an early Greek script discovered in Knossos by Evans, which established cultural links between the two civilisations.

By now we were spending less time with antiquities and more with the hedonistic delights of tourism – the beaches, the sun, the ouzo and the beer. We felt we’d done justice to the college grant and deserved a couple of days R & R too, like every student down the ages. And Crete was completely unspoiled, with the local taverna providing everything available in the way of comestibles. No bars, no beach umbrellas or deck-chairs – no modern, commercialised sea-fronts at all. The open-fronted taverna sat comfortably at the edge of the beach, with a couple of tables outside for early and late occupation usually by local men with coffee and a glass of something stronger. And they would have been surprised if we had not made camp along the beach for the night.

Our ferry took us directly back to Piræus, not as the modern traveller might sail, via Santorini, a half way port. The island is now known to have played a pivotal part in the later history of  Crete: its volcano erupting in around 1,500 BC, and destroying the Minoan settlements, including Santorini’s own Akrotiri (shown above, half-excavated), and felt as far away as Egypt and Turkey.

We retraced our journey from Athens via Brindisi, Milan, Paris, Calais and the clichéed white cliffs of Dover – where my lanky companion was stopped and searched by Customs – and declared innocent. Otherwise we returned home bronzed, unscathed and hungry for some of Mum’s cooking. Then back to work with seven or eight weeks left to cram for the exams (known euphemistically as ‘collections’) which would greet us as soon as we returned to college. The main topics were the original thoughts of Plato and Aristotle, a fitting coda to the summer’s Homeric events.