I was poking around the property yesterday and listing all the jobs to be done, trim this, cut that wash this, oil that.  All the result of long absence and hired lawn care, when I came upon two giants in the side yard.

Trees, or at least large bushes, about five feet tall and five or six across.  They were definitely not there when I left. 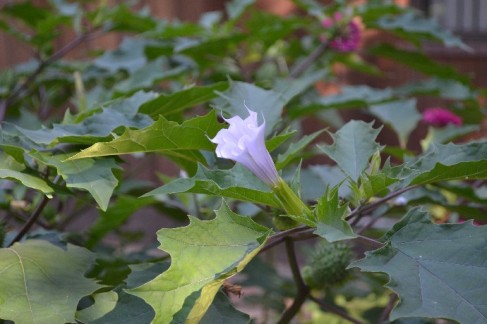 Much searching turned up the following:

Datura intoxication typically produces delirium (as contrasted to hallucination); hyperthermia; tachycardia; bizarre behavior; and severe mydriasis with resultant painful photophobia that can last several days. Pronounced amnesia is another commonly reported effect. The onset of symptoms generally occurs approximately 30 minutes to an hour after smoking the herb. These symptoms generally last from 24 to 48 hours, but have been reported in some cases to last as long as 2 weeks.

More interesting to me was the following gem:

The James-Town Weed (which resembles the Thorny Apple of Peru, and I take to be the plant so call’d) is supposed to be one of the greatest coolers in the world. This being an early plant, was gather’d very young for a boil’d salad, by some of the soldiers sent thither to quell the rebellion of Bacon (1676); and some of them ate plentifully of it, the effect of which was a very pleasant comedy, for they turned natural fools upon it for several days: one would blow up a feather in the air; another would dart straws at it with much fury; and another, stark naked, was sitting up in a corner like a monkey, grinning and making mows [grimaces] at them; a fourth would fondly kiss and paw his companions, and sneer in their faces with a countenance more antic than any in a Dutch droll.
In this frantic condition they were confined, lest they should, in their folly, destroy themselves — though it was observed that all their actions were full of innocence and good nature. Indeed, they were not very cleanly; for they would have wallowed in their own excrements, if they had not been prevented. A thousand such simple tricks they played, and after eleven days returned themselves again, not remembering anything that had passed. – The History and Present State of Virginia, 1705

After that introduction  I was not even tempted to sniff the flowers, quickly donned my thickest gloves and dug both up by the roots, chopped them up with the shears and packed them in a bin for the next trip to the dump.

You have been warned.

Expat Welshman, educated (somewhat) in UK, left before it became fashionable to do so. Now a U.S. Citizen, and recent widower, playing with retirement and house remodeling, living in Delaware and rural Maryland (weekends). View all posts by Low Wattage

3 thoughts on “Backyard Invaded by Aliens.”