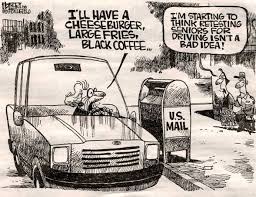 As Backside’s fan already knows, it’s a big day for me next Saturday – the daunting seven-oh experience, drawing attention to the unavoidable truth that most of my future is now in the rear-view mirror. But am I down-hearted? No, no, no. Well, not now I have renewed my driving licence, as I was obliged to do.

First I had to have the medical, which I had been preparing for. The anti-dement test is to remember three words which the doctor is obliged to specify – his or her choice – and which I should recall at the end of the test period. Luckily for me I was at the mercy of a fragrant young Swedish lady trainee who clearly took pity on me as soon as I wrote 2012 in the date box. She also agreed that I should read the eye chart in English because neither of us could differentiate between the Danish sounds for a, e or æ, let alone ø or å!

The final step was to deliver my form to the local council office – which now deals with the whole process via screens; I had to sign on a hand-held one and my form and photo were eaten by another. The kind lady said I shouldn’t leave the country – if I intended to drive there – because I was temporarily banned (except in Denmark) until my new plastic licence materialised.

Which it has now done! I’m legal again for four years, when  I have to repeat the process. But I’ll be ready for them – remembering three words for 20 minutes every day, learning what year we’re in and practising my vowels. Meanwhile Mrs J and I do plan to leave the country – for a holiday – but more of that later.