Dave failed miserably to shut out the excruciating din of his fellow councillors. The fog inside his head was a real pea souper which showed no sign of lifting anytime soon. Why did he insist on the tequila chasers with every pint last night? Rob, his partner in crime from uni had called out of the blue, saying he was in town on business and they should get together for a few ‘sherbets’ and  a catch up. It had been a good night, they yakked endlessly about the old days, where people were now and who’d done what to whom. He vaguely remembered staggering through his front door around one a.m. and little else. 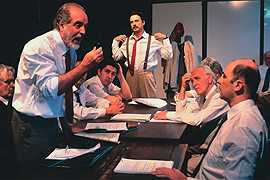 On the way into work he figured he could tell the PA to hold his calls, close the blinds and catch a few winks on the sofa while pretending to study the latest landfill proposals. Unfortunately Dave had totally forgotten the big meeting scheduled for 9:00, the new leisure complex. Plans had been submitted and approved to construct a sports hall and golf course on the old colliery site; they had qualified for a substantial grant to help with the costs. Then some bobble hatted, ‘South African Peace Crisp’ munching enviro-nutter discovered a lesser crested arse newt or something and the whole plan was shelved faster than you could think ‘preservation order’. The offer had a limited window of availability. This meeting was to decide on a new site and get the plan out before the grant expired.

Dave didn’t care for golf, or ‘promotion sticks’ as he liked to call it, waste of a good walk as far as he was concerned. Neither did he see the point of jogging on a rubber belt without actually going anywhere or pretend rowing / cycling with similar lack of geopositional change. What he did appreciate however, was virtually free funding and the lure of numbers in the credit column from membership fees. Nursing a pounding head, he looked mournfully at the empty coffee cup before him. He sighed and with little alternative allowed the squawking to register for a moment.

“No! Doesn’t have any transport links”

“Sure, why not? I’m almost positive the Mayor, Police Commissioner and all those tycoons and footballers won’t object to a municipal site on their doorstep!”

“Where were you last week when we voted in the new walk-in health centre?”

It took every ounce of Dave’s self restraint not to cry “Mornington Crescent!” He had the sneaking suspicion that the humour would not be appreciated right now. The arguing had been underway for an hour and a half as each region desperately tried to acquire the new facility for their borough. He would not have been surprised if one of them hadn’t planted that largely spotted pond crawler or whatever and made sure the bunny huggers found out about it. He scanned the purple faces around the table and wondered which one it might be. In his Poirot like day dream he hadn’t noticed that the annoying drone had gone. None of them could come up with a reason why the Burns Ave site was a no-go.

It had been the old slate quarry way back, after it dried up in 1890-something, nature was allowed to reclaim the land and it had become a sort of wild heath to the south of the city centre. Locals had been campaigning for years to have it cleaned up or developed since it had become popular with travellers, drug users and some section of the perverted public known as ‘doggers’.

As chairman of the meeting, Doug broke the silence. “Right then I suppose we had better go and have a look at it. There is a very nice little public house nearby that does a good ploughman’s, if we drag this out we can get a lunch out of it.

Slowly it occurred to Dave that he could get out of this and embrace the peace and quiet he so desperately craved. “Darn it gents, I have a meeting with the landfill people at 12, it will drag on for hours. I don’t see any immediate problem with Burns Avenue. Such a shame I can’t join you, it’s such a nice day out too.”

Satisfied with the junior junket they had arranged for themselves, the others filed out of the boardroom each passing commiserations to Dave for missing the ‘trip out’. He kept up the subterfuge trying his best to look disappointed. Once they had all gone he was able to plan his escape. “Coffee, lard and sleep in that order”. He shuffled back to his office and his long suffering assistant.

“Sorry Ange, I have to meet with some environment types and will be out for the rest of the day.” Suitably vague enough to work he thought. Angela noted he had no further appointments in the diary today and wished him a good afternoon; he contemplated stage 2 of his cunning plan. The double bus and metro journey to work that morning had been torture and he couldn’t face it again, he would treat himself to a taxi. There was a rank in the next street over and he could grab some food on the way. Dave grabbed his jacket and waved farewell to his PA as he shuffled out the door.

The noise of the city seemed amplified as he emerged into 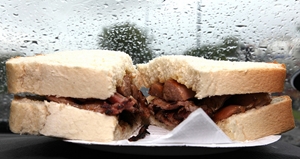 the bustling high street. His head pounded as he crossed the road, cut down a side alley and through to the large car park for the many commercial buildings in the area. There in one corner was a roadside van. It was hardly cordon bleu but right now, it looked like The Ritz. Sausage and bacon sandwich in hand, he trudged on towards the taxi rank. The fried food began to work its magic on his delicate digestive system.

The last morsel disappeared as he rounded the corner to the taxi office. A grand title for a portakabin in the back car park of the Rose and Crown, but functional and fit for purpose. He eyed the year old Skoda Octavia parked by the main door and figured he was in luck. He poked his head round the ‘office’ door.

“Do you have a car free to go to Kenton Bank?”

“ERIC!!!” shouted the grimy looking operator, Dave suspected he was the scruffiest man he had ever clapped eyes on. Then Eric shambled through the door, and Dave was forced to revise his initial assessment. Brownish polyester checked trousers over frayed, grimy green flash trainers. A heavily creased shirt with missing buttons 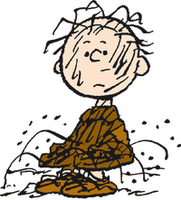 revealed a stained cotton vest which Dave assumed was once white but was open to alternatives.

He followed Eric out to the lot, instead of opening the Octavia, Eric turned towards the street. On seeing Dave’s confusion Eric explained that his car was parked at the kerb. “I can’t bring it into the yard, reverse is knackered!” Eric walked up to an X reg (1980) Nissan Bluebird which might once have been a powder blue judging by the rare islands of paintwork amid the oceans of rust. Carefully Dave opened the rear door afraid that something vital might come away in his hand. While the exterior was an assault on the senses, he was amazed to note that the interior was determined not to be outdone.

Out of a very real fear of seeing his sandwich again, Dave reached down to open his window and get some much needed fresh air.

Deciding he had somehow entered a parallel universe, he was just about to get out and request a different car/driver when in an uncharacteristic flurry of activity Eric started the engine, engaged first gear, failed to signal, ignored his rear view mirrors and shot out into the morning traffic to the sound of an enraged car horn somewhere in the far too rapidly increasing rear distance. To Eric, speed limits, give way signs, traffic lights and pedestrian crossings were all things that simply happened to other people. Dave could do nothing but embrace the horror and concentrate on retaining the contents of his stomach as the car lurched from one lane to another, screeched around corners and decelerated/accelerated like the star ship Enterprise. In an attempt to get Fernando Alonso’s stinky older brother to ease off a tad, Dave tried to engage him in conversation. “Have you been on shift all night then?” he asked, although judging by the dirt and the smell , ‘all week’ might be a closer estimate. “Naah mate, I hate nightshifts, you can never get any peaceful kip during the day .You’re my first fare of the day”

In abject terror, Dave realised that rather than slowing down to converse as he had hoped, Eric simply turned his head rearwards to establish eye contact and allowed the bluebird to decide which way to go. Mental note to self Dave, don’t distract the lunatic again. Ever the one to look on the bright side, he tried to console himself that should he survive the journey, he would be home, ergo in his own bed in record time. Dave decided to concentrate on not adding his brunch to the kaleidoscope of colours on the upholstery and blanking out the blur of bricks, trees, traffic and pedestrians barely visible through the grimy glass.

Miraculously, Eric dropped out of warp in Kenton without incident and pulled up outside Dave’s garden gate, he realised that he had never been happier see it. Looking at the meter the fare was £13. Dave pulled out a tenner and 3 coins and dropped then into Eric’s grubby palm, anxious not to make contact with anything which might be breeding there.

“What? No Tip?” exclaimed a disappointed Eric.

He may have been harried by an horrendous hang over and still stupefied from travel at a rate approaching the speed of light but Dave still had enough reserves of wit to give the grotty little man a piece of his fogbound mind.

“Yes, lift your Dahlias in the Autumn!”

A look of confusion descended over Eric’s features, that or he was suffering a stroke either way, Dave didn’t really give a monkeys. Eventually it dawned upon Eric that his charm offensive had failed and no further remuneration would be forthcoming. With his usual care, consideration, observation and clutch control Eric blasted off to infinity and beyond leaving Dave dumbstruck in leafy sub-urban silence. Steadily the cranial throbbing returned and the call of the pillow began to draw Dave out of his shock.

It was 11:15 a.m. If he hit the duvet now, he could get some serious sleep in. Curtains drawn and windows closed  his bedroom was perfectly peaceful, he thought about the golf course for a split second before closing his eyes and drifting into blessed sleep.

No sooner had his lids closed than there was a ringing in his ears. Rudely awoken he looked at his watch it was 5:30. Six hours of sleep had flown by in a heartbeat, but the ringing in his ears persisted. Slowly it dawned that his phone was demanding his attention. Blindly reaching out for the accursed device he pulled it to his ear. “Hello!”

Dave? Hullo mate its Rob! Where we off to tonight then?”