So, there we were in Jerusalem at Christmas and what are you going to do?  Jocks and  keenly aware that we all had at least one relative who would never forgive us if we didn’t do Bethlehem. Mrs M. had her granny and I had three Highland maiden aunts.  Alexanderina (Ina), Christianina (Chrissie) and Hugh Ellen. (Huellen).

To explain, Grandad had promised all his brothers that he would name his children after them but Granny kept producing daughters apart from Uncle John and my Dad. Mary was the first-born and got away with it and also got married. My other paternal aunt, the memorable and oft-mentioned Auntie Dolly (Donaldina), was as far away from being a maiden as it was possible to get and seriously irreverent and irreligious with it. I knew that all I had to do was send her the usual filthy postcard to stay in her good books. I also knew that Ina, Chrissie and Huellen would be really hurt if I did not come through on the Bethlehem front.

There was an organised tour laid on but the intrepid Mrs M., myself and a few others went for the independent travel option, also known as the Arab bus to Bethlehem. 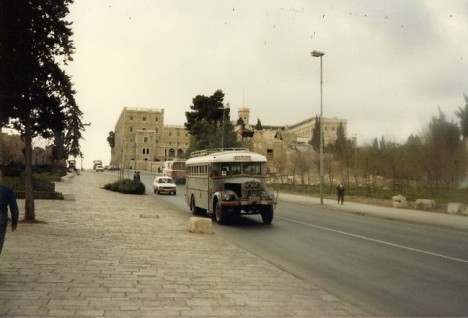 I had a memorable trip, sitting next to a cage of chickens. An interestingly acrid and slightly pungent miasma which apparently hung over me for the rest of the day. The bus dropped us at the edge of Bethlehem. An incredibly mundane street to walk up to get to Manger Square. Bought some falafel to restore the inner man and then walked the walk.

This was on or about the 30th of December so they were taking down the Christmas decorations for the Western celebration and putting them up for the Orthodox one.

Visited the Church of the Nativity and then moved on to explore the rest of the town. Climbing up the far end to see if there was a decent photograph to be had, we got beckoned by this priest. A born hustler who bats not an eyelid as he assures us that he can show us one of the oldest Bibles in the entire world. He was a Copt. To hear him spin the tale, you would believe that his Church was founded by Jesus during the flight to Egypt. Whatever, it cost hardly any shekels at all to view said Bible (probably c. 1850) and to get to go up the Church tower to to take a photo looking back towards Manger Square.

Quick visit to see where Mary first lactated and then back to do my nepotic duty. One side of Manger Square was lined with tourist traps selling the most incredibly tacky souvenirs. Being a good Presbyterian, all I had to do was to buy and send the  postcards to prove that I had been there. The High Kirk people amongst us had to do a lot more to satisfy their relatives. A popular purchase was a Nativity scene in olive wood.

We had in our number a tenor who was my pet hate and, in my opinion, a total scumbag. An aggressive and arrogant sexual predator who had boasted on the bus about the fun he was having with Arab boys and who had already been caught in one or two compromising situations in the week that we had spent in Israel. He announced that his sole reason for visiting Bethlehem was to buy a Nativity scene for his great aunt which would ensure that he got mentioned in her will when the time came. He settled on a unique set where every piece fitted exactly and precisely.

Well, of course, you have to haggle, but he was a totally offensive tosser and deeply embarassed us all with the abuse that he heaped on the luckless vendor. Eventually, they agreed a price. On the bus on the way back, he crowed incessantly about his bargain. Back at the kibbutz, he insisted on showing everybody said bargain. ‘There’s the baby Jesus, there’s all the animals, there’s Mary and Joseph, there’s, there’s, there’s – the bastard’s only given me two Wise Men.’

The much-abused vendor had palmed the third Wise Man while wrapping up the purchase and our boy had to take a taxi back to Bethlehem (a Friday and the Arab bus was not running) to complete the set. Got charged the same as he had paid for the rest of the pieces plus said taxi. Major and deserved  result, in my opinion