I’m spending a happy hour or so sorting pics on the Mac and found these two from a trip to Tokyo. It’s the lavatory in my hotel which I christened, ‘The Atomic Khazi,’ with all its flashing lights and buttons. It took a lot of courage to use it for the first time I can tell you.

END_OF_DOCUMENT_TOKEN_TO_BE_REPLACED

The heat in the air beat down like an oppresive blanket enveloped in steam and covered in treacle as the woman stumbled in the road and cursed yet again as she blinked away the sweat that was pouring down her face and turning her expensive dress into a sodden rag.  A parrot screeched and the sound mingled with the strains of a radio playing a fast Rhumba beat somewhere nearby.  She strained again to lift the suitcase from the dusty road to continue and then saw a seedy looking place that looked as if it may contain the type of man she was looking for, a man built for speed rather than comfort and who wouldn’t ask too many questions. END_OF_DOCUMENT_TOKEN_TO_BE_REPLACED

I’ve not seen Janus on here for a while, anyone know a reason? 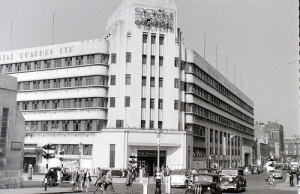 This is were it always started, Victoria Coach Station, usually in August and always early in the morning, I’m talking about the Annual holiday to Ramsgate for the family, Mum, Dad, little Sister and a young OMG, short trousers, school cap and best blazer. We would journey up to Victoria by bus as Dad worked for London Transport putting up bus stops and shelters so he had what was known as a ‘sticky’, a staff pass for free travel on the buses and tube. Suitcases were not a problem as we only used to take one or two, unlike today when I and MrsOMG require a few coolies and pack elephant just for a dodgy weekend in Brighton. Upon arrival Mum would take us kids to the cafeteria, a place full of gleaming machines, hissing and belching steam into an atmosphere already full of smoke fom cigarettes, pipes, cigars and  from griddles burning industrial amounts of lard as the bangers and rashers sizzled their calories and cholesterol into a public blissfully unaware of the terrors to come once the funsuckers got their claws into the nations favourite start to the day. While we kids were being squeezed between large ladies all wearing their best frocks and coats, together with the obligatory hat, Dad was away sorting out the tickets for the coach that would take us to, what was to me, was an exotic location on the Kent coast, Ramsgate. When we were ready, Dad would bang his empty tea cup down and with the words, ‘Right, let’s get weaving,’ would march us out to join the queue for the East Kent coach to the seaside and paradise.
END_OF_DOCUMENT_TOKEN_TO_BE_REPLACED

He walked slowly over to the revolving bar and eased himself onto one of the chrome and red leather seats, he swivelled in to face the bar and caught the eye of a bartender who moved quickly towards him, ‘Usual Sir?’ The man nodded and took out a slim gold cigarette case which he opened, glancing around at the other occupants of the bar as he did so. The usual Saturday night crowd he thought as he reached into his pocket to replace the case, taking out a gold Dunhill lighter from its custom made pocket in the jacket of the suit. He lit his cigarette and blew the smoke upwards as the barman returned with his  tonic water, the ice clinking in the tall glass as he placed it on the bar in front of him andtaking the ten shilling note offered. ‘That’s ok’ said the man, ‘keep it,’ the barman was not surprised by the man’s generosity, he always tipped well and as a consequence was never,  kept waiting when when the bar became busier later on. The man swung around on his seat and surveyed the dance hall confirming his earlier thought that it was the usual crowd. It was amazing how many people were creatures of habit when it came to the ritual mating ground of a Mecca ballroom, same place, same time, same faces. Two girls walked past him and one flashed him END_OF_DOCUMENT_TOKEN_TO_BE_REPLACED

I could not find the blog or comment I posted about the 60s, so I have jotted this down.

The Ford Zodiac and it’s silky smooth six cylinder engine purred like a well contented cat as it moved swiftly along the Brighton Road, slowing briefly the driver executed a U turn and stopped outside a large dance hall bearing the legend, ‘The Orchid Ballroom’. He remained in the car just long enough to light a cigarette and then opened the door and stepped out. Anyone passing would have seen a tall, well built man wearing a classic camel hair coat, open at the front and with belt hanging loose. The man locked the car and entered the dance hall, moving swiftly down the stairs into the warm, beating heart of the dance hall. He breathed deeply and inhaled the heady scent of perfume and cigarette smoke, he smiled to himself as the music skirled up the stairs to greet him, always the same song, ‘You’ve lost that loving feeling’, always the Righteous Brothers. He  checked his overcoat and over tipped the girl, knowing full well that she would give him his coat without him waiting in the usual Saturday night crush at the end of the evening. Anyone passing who cared to look and a few did, would have noticed his height, 6′ 4″ and  the beautifully cut Mohair suit that he carried off so well, together with the self assured way that he moved through the crowd. He went to walk into the Gentlemans toilet and as he did so three youths started to barge out, the tall man held his ground and said nothing but the youths looked down, standing back as he entered. He checked himself in the mirror and made a few minor adjustments to his gold silk tie before taking a comb from the top pocket of his jacket and running it back through his hair. Satisfied with what he saw he made his way out to the dance hall and his heart quickened a pace as he took in the bright lights, the swirl of sound, the scents and smells.. and the women, ah, the women, he smiled again, he was home, this is were he belonged, this was why he was the best salesman in the showroom, this was why he spent what he did on his clothing, this was what it all came to in the end, the Saturday night dance at the Orchid.. and he owned the place.

This is where it all started for me and countless other kids, the home of that great Institution that enabled many Mums and Dads to play…well….Mums and Dads while the nipper was off clutching his threepenny joey which gave him or her admitance to the palace of dreams AKA ‘the pitchers’.

In my case it was out of the house, turn right, take five steps, cross the road, take five more steps turn right and through the doors of my local Odeon, saying hello to my uncle Len who was chief commisionare. I would then pay my three pennorth and watch the little stub of ticket spit from its slot and enter the warm noisy fug of the cinema. Finding my oppos down the front I would take my place in expectation of the first part of that mornings entertainment, the mighty wurlitzer. END_OF_DOCUMENT_TOKEN_TO_BE_REPLACED

Off to a party later to see the New Year in, MrsOMG asked me to shave of my tache, she says it makes me look suave.

Happy New Year to all charioteers past and present, my best wishes.

As it’s Christmas I thought I would put a top hat on dear old Ben.

Thanks for all the fun and games. 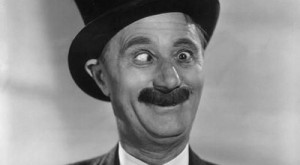 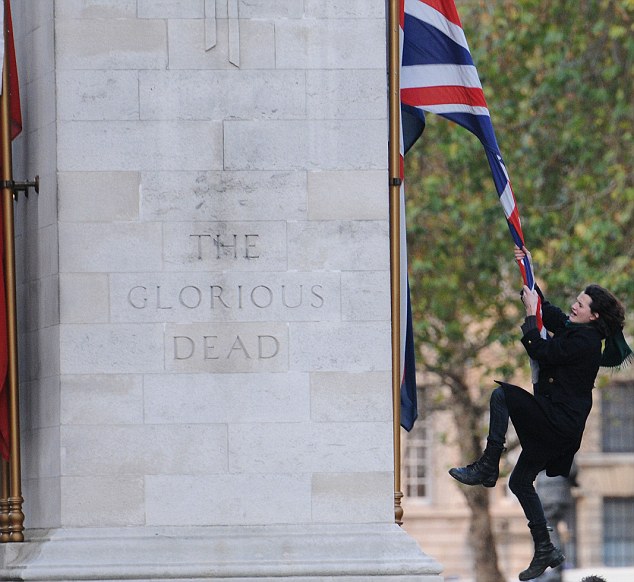 I cannot put my thoughts about this ‘person’ on this page so I’ll just let her actions speak for themselves. I’m not even going to label her a student or an anarchist, quite frankly I don’t give a damn what she does. But I would like someone to be able to identify her, I would like her to see this image and then sweat and shudder in fear of what retribution may fall on her pretty little head.

Someone clever may be able to enlarge her face on here, if you can, please do.