I got caught in a bog yesterday on the bike.

I thought it was just a bit of soft ground but it was genuine pedal-stopping,  smelly bog.  For a couple of seconds, I was balanced there stationary, thinking  “Bugger.  This hasn’t happened for years!”  before gloop – one foot went deep down into the soft stuff above the ankle.

I haven’t encountered unrideable territory for some time.  I blame the expedition leader, Bob,  who was determined to go off-piste to stop me and my pal V.  slacking and chatting.  He was successful in that, at least.

CB’s pic of the bridge with the mud pool underneath it reminded me how things used to be in the Forest of Dean, before they constructed the cycle trails and invited the world and his wife and kids to come and cycle there.

Not that I have anything against providing paths for family cycling… oh no.  Anything that introduces people to the joys of pedal-power must be good.

But it made me think back to the days when the boys first had mountainbikes and it seemed sensible for DT man and I to get some too in order for the kids to do something other than ride up and down the road outside the house.

I got my first bike free with a Philco tumble-dryer – it was a Halfords offer. I’d had one ride on a rental bike in the Forest and decided yes, I think I like this but I wanted something exactly the right size and with a comfier saddle.

Back then,  if you went cycling in the Forest, you really needed to take an OS map in order to follow the tracks of the old disused railways and tramways, taking frequent detours off piste where it looked inviting.

It was different every single time. You never quite knew what was ahead – blocked up old tunnels half hidden in ferns, traces of old mine shafts, hidden pools where deer might be found,  marshes and sudden steep inclines.

I should have known from the very first ride in the Forest, when No2 son went off, aged 8 and promptly got lost, that it would all get out of control. The three of us – only one could keep the map – had to take three different routes back to the car in an attempt to find him.

When I got back, already rehearsing in my mind how I was going to break it to the local constabulary that, as an unfit mother, I let my small child loose in the Forest, he was pedalling around in circles in the car park, unbowed and cock-a-hoop at finding his way back.

He was a pain in the ass from that day on, pedalling manically off the front at every opportunity and showing a flagrant disregard for hills.

There was one very tough steep rough track ascent to a ridge.  The family cycling trail designers sensibly decided to leave it out of their plans and so it’s splendidly neglected and overgrown now.  The first time, it caught us all by surprise.

We watched him rush at it on his chunky little Halfords mountain bike.

“He’ll never keep up that pace… you watch. Any minute now he’ll run out of steam,” I panted.  There was general agreement among the three of us.

But he didn’t grind to a halt two thirds of the way up.  He didn’t start pushing. He disappeared from view over the top. It was nothing short of astonishing, especially as, at the time he was a dedicated  Neighbours addict and couch-potato.

He also had a propensity to drop off the most hairy downhills into oblivion before the rest of us could catch him, which was also quite stressful in the early days until the realisation set in that he was perfectly at home and a natural on a bike,  so the trick was to just let him get on with it.

The most fun to be had as a family was through mud. Specifically through a lengthy and icky stretch of purest black Forest mud which lay glistening and weed-speckled under and either side of the  former railway  bridge near the Dilke Hospital.

The first time we encountered it with horror. There was no way round. We all stopped. How could we cycle through that lot? One of the boys made an effort and managed to carry on through without giving in and putting the feet down.

I was hopeless, squeaking in protest and emerging with trainers as rounded as Mickey Mouse’s shoes – only black.

But it became out regular challenge. We would go out of our way to go under the bridge. It was quite an achievement, all getting through without hesitation (actually I might have hesitated a bit, but no-one notices if you are last, I found), halting or getting feet covered in gloopy mud.   It was a matter of mindset and determination.   It was disappointing when it was too dried out and easy.

Finally, one day we were whooping along merrily and discovered that our  favourite playground had been tidied up beyond recognition.  A nice flat, properly-drained, fine-stone path had been laid over it.  It was the end of an era.  We all mourned a bit, actually.  Like the time we found Chicken Rock had been taken away and laid as hardcore under the roads of a new housing estate. The legends of Chicken Rock are all that remain.

Of such minor achievements, good days are made and biking together, washing bikes afterwards and experiencing that completely chilled-out, post-exercise total relaxation was some of the best  family-bonding stuff  that we ever did.

Under The Bridge  yesterday – all tidied up and, to be honest, quite boring. 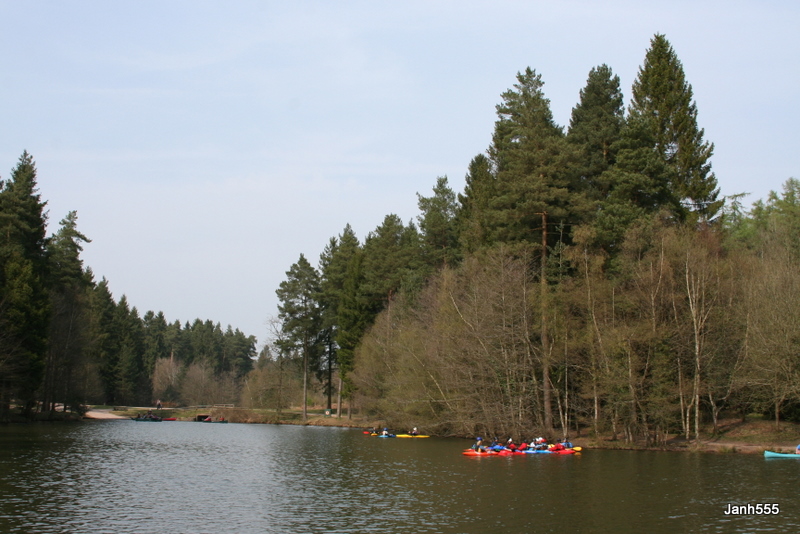 Mud, mud etc   by Flander and Swann.   Hippo shortage in Forest of Dean so filmed on location somewhere in Africa.